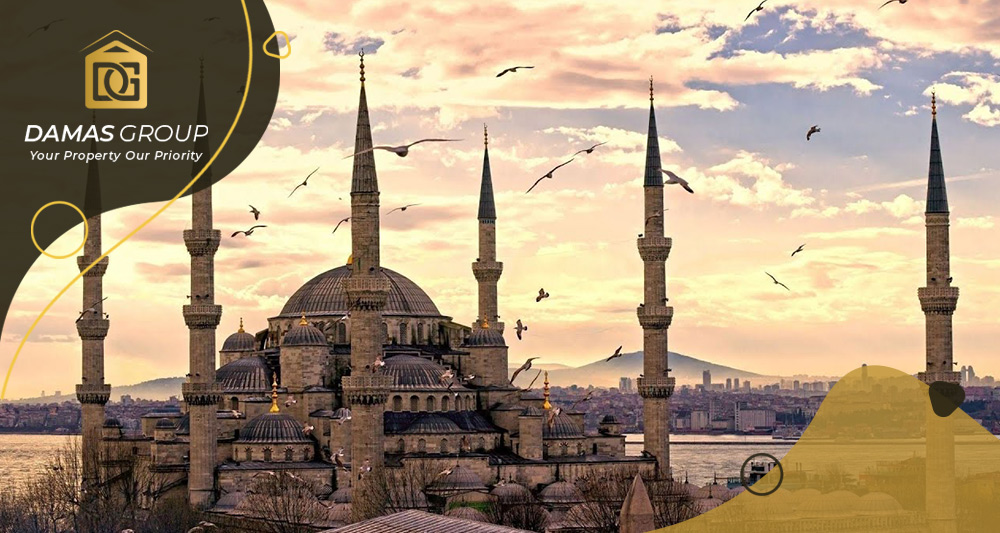 There are, in the Turkish city of Istanbul, number of mosques which are of a historical character, and these historical mosques are considered a destination for many tourists and visitors from all over the world. The most remarkable mosques are Abu Ayyub Al-Ansari Mosque, Ayasofya Mosque, Sultan Ahmet Mosque, Sulaymaniyah, and many others.

When you visit Istanbul, we strongly encourage you to visit one of the most important monuments of the ancient Islamic architecture that was built in the era of the Ottoman Empire and was named after Sultan Mohamed Alfatih, the mosque that embodies architectural beauty in its courtyards and arcades combining the traditional and modern design, it is Sultan Mohamed Alfatih Mosque in Istanbul, Turkey. However, Damas Real Estate Website will take you on a tour of information about this archaeological mosque, which is a destination for millions of visitors annually:

The old Sultan Mohamed Alfatih Mosque is located in the European side of Istanbul. Building this mosque took seven years from 1463 until 1470. It was ordered by Sultan Mohammed Al- Alfatih to be built on the ground of a church that was destroyed in the Fourth Crusade. Then it was subjected to numerous earthquakes and repairs until it was completely destroyed by a strong earthquake that occurred in 1766 and was completely rebuilt in 1771 in a square form.

Who is Sultan Mohamed Alfatih?

He is the seventh sultan of the Ottoman Empire, who was famous for his conquests through which he expanded the Islamic state and eliminated the Byzantine state, which many historians consider a transition from the Middle Ages to modern times. However, one of the greatest achievements of Sultan Mohamed is the conquest of Constantinople.

Alfatih Mosque is an ancient religious and social center:

Alfatih Mosque was not only a place to perform acts of worship but also a religious and social center, with the following been built around:

Most of these buildings have not lasted till the moment unfortunately unlike the tomb of Sultan Mohammed Alfatih which is stationed in the background of the mosque just near the garden of the mosque.

Right in the middle of it, the mosque has a giant wall of which there are stairs that lead up to the front courtyard of the mosque. The mosque has also a main dome with a length of 26 meters built on four smaller domes supported by four great marble pillars. The mosque has two similar minarets. Moreover, the mosque was decorated with Baroque calligraphic motifs. The old mosque was built by the architect Atik Sinan, while the current mosque was designed by an engineer called Zainab Fadlioglu with the assistance of the architect Hosrif Tayl, who is known for his design of a number of mosques in Turkey.

It is easily accessible by metros and buses as you can find stations serving the area. It is free to enter the mosque. Visit this mosque will not be forgettable for those who admire beauty, especially the Ottoman architectural arts.

In general, Istanbul can strongly be considered the first tourist destination for those who wish to tour the sights of Turkey because of the importance of the city historically, economically, culturally, and commercially, and since it contains most of the tourist areas in Turkey. Therefore, do not forget to put Sultan Alfatih Mosque within the schedule of your visit to enjoy the unique architecture that combines the originality and modernity.